Recently while I was giving a C# talk,  I realized that a lot of developers are still not familiar with the advantages of some of the evolving, but very useful .NET libraries. Hence, I thought about writing a high level post introducing some of them as part of my Back To Basics series, generally around .NET and Javascript. In this post we’ll explore Interactive Extensions, which is a set of extensions initially developed for Reactive Extensions by the Microsoft Rx team.

Interactive Extensions, at its core, has a number of new extensions methods for IEnumerable<T> – i.e it adds a number of utility LINQ to Object query operators.  You may have hand coded some of these utility extension methods some where in your helpers or utility classes, but now a lot of them are aggregated together by the Rx team.  Also, this post assumes you are familiar with the cold IEnumerable model and iterators in C#. Basically, what C# compiler does is, it takes an yield return statement and generate a class out of that for each iterator. So, in one way, each C# iterator internally holds a state machine.  You can examine this using Reflector or something, on a method yield returning an IEnumerator<T>. Or better, there is a cool post from my friend Abhishek Sur here or this post about implementation of Iterators in C#

Fire up a C# console application, and install the Interactive Extensions Package using install-package Ix-Main . You can explore the System.Linq.EnumerationsEx namespace in System.Interactive.dll  - Now, let us explore some useful extension methods that got added to IEnumerable. 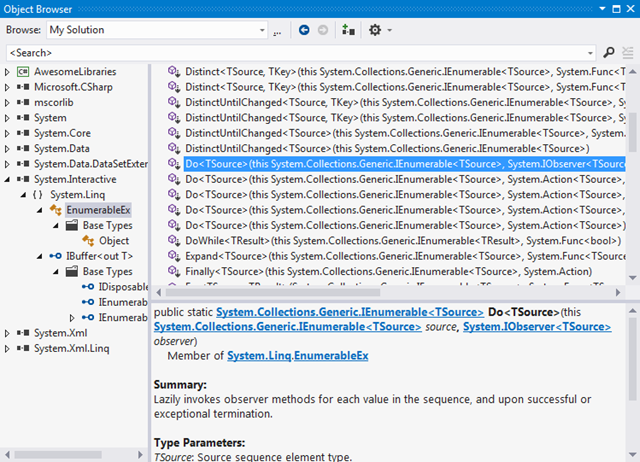 What the simplest version of 'Do' does is pretty interesting. It'll lazily invoke an action on each element in the sequence, when we do the enumeration leveraging the iterator.

And the result below. Note that the action (in this case, our Console.WriteLine to print the values) is applied place when we enumerate.

Now, the implementation of the simplest version of Do method is something like this, if you have a quick peek at the the Interactive Extensions source code here in Codeplex, you could see how our Do method is actually implemented. Here is a shortened version.

DoWhile in Ix is pretty interesting.  It generates an enumerable sequence, by repeating the source sequence till the given condition is true.

As expected, you’ll see the foreach loop enumerating results repeatedly, till we reach meet the DateTime.Now < then condition – i.e, till we reach 10 seconds.

Scan will take a sequence, to apply an accumulator function to generate a sequence of accumulated values. For an example, let us create a simple sum accumulator, that'll take a set of numbers to accumulate the sum of each number with the previous one

And you may have a look at the actual Scan implementation, from the Rx repository in Codeplex . Here is an abbreviated version.

We just touched the tip of the iceberg, as the objective of this post was to introduce you to Ix. We may discuss this in a bit more depth, after covering few other libraries including Rx. There is a pretty exciting talk from Bart De Smet here that you should not miss. Ix is specifically very interesting because of it’s functional roots. Have a look at the Reactive Extensions repository in Codeplex for more inspiration, that should give you a lot more ideas about few functional patterns. You may also play with Ix Providers and Ix Async packages.