How to create a quick installer to deploy your apps using Null Soft Scriptable Installer System (NSIS) – It is Small, Free and flexible

So, you are expected to switch to Install Shield for your setup and deployment, if you are presently relying on Visual Studio Installer. In this post, let us explore Nullsoft Scriptable Installer System or NSIS as an alternate, open source option for packaging and deploying your applications.

If you’ve ever installed WinAmp, NSIS is the installer used by WinAmp. I used Null Soft Installer for the first time way back in 2004, when I was doing some shareware business. I had a product called Smart Editor Professional (Still available as a freeware in sites Tucows) which was developed in VC++ and VB – and I used Nullsoft NSIS for scripting the installation procedure, which included copying files, showing a splash screen, registering ActiveX dlls, providing optional install components, Creating Program menu entries, Associating file types etc. One of the most interesting aspect of NSIS is the small installer footprint, and the easy to understand scripting aspect.

Now, to start with, you need to download and install NSIS from here. Once  you finish the installation, select NSIS from your StartMenu->Programs, to bring up the NSIS menu. 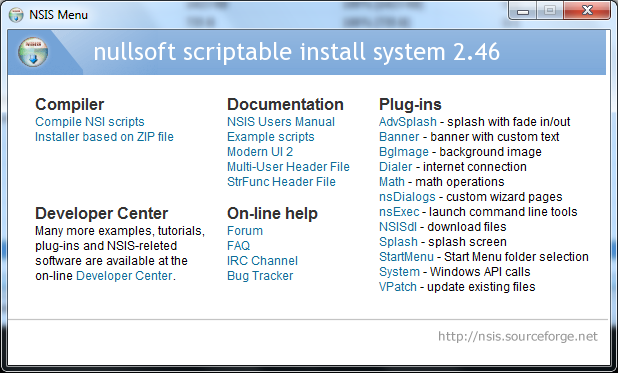 A lot of resources are already listed there, but I’ll provide a quick start. You’ll find two options under the compiler – to (1) Compile NSI scripts, or to (2) Create an installer based on a Zip file. If your requirements are minimum or if you need to create an installer that’ll simply extract files from a Zip file to some where, you can try the second option. Otherwise, you can write a NSIS script (a simple text based script file with extension *.nsi) to configure the installer as you need.

Once you have an NSIS file, you can create the installer by ‘compiling’ it. Click ‘Compile NSI scripts’, to bring up NSI Script compiler. 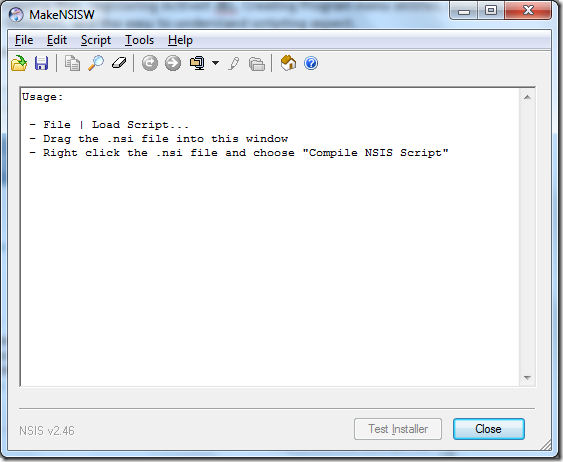 Now, As you can imagine, you need to create an *.NSI script that directs your installer how to package your components, that can be compiled with MakeNSISW. There are tones of examples available in Program Files\NSIS\Examples folder and the User Manual is pretty comprehensive - so I’m not going to actual scripting part here. Basically, an NSIS script file has the following components.

Creating a simple script and an Installer

With that information, let us create a simple NSI file. Open notepad, and copy and paste the below script. If you want a decent editor for NSIS scripts, Notepad++ already supports NSIS syntax. The below script demonstrates most of the points I described earlier. Basically, it’ll create an installer by packaging all files from your c:\inst folder, and will deploy those files to a target folder specified by your user. Note that in NSIS a ; is for specifying a single line comment.

Note that we’ve three ‘Pages’ - components, directory and instfiles specified. Also, we’ve a section “Stuff”, where we use File directive for informing the NSIS compiler which all Files to package (all files in your c:\inst\*.*) - so that those files will be carried by our installer. Also, there is a callback function .onInit, which will be called automatically by installer, to get an assertion from the user – Whether to continue or not - when the installer is initialized .

You’ll see the generated installer exe, NsisDemo.exe, as we specified in the Installer Attributes. Now, if you run the Exe, you’ll see the following screens.

1 - This is triggered by our script in .onInit 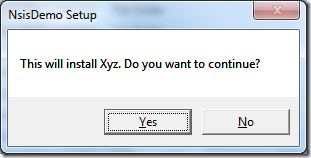 2 – Once you click Yes, this is the ‘component’ Page. See the section ‘Stuff’ inside that. 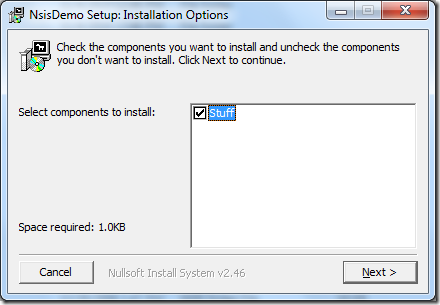 3 – Click Next to see the ‘directory’ Page. See that what ever we specified using InstallDir installer attribute has appeared as the default destination folder. 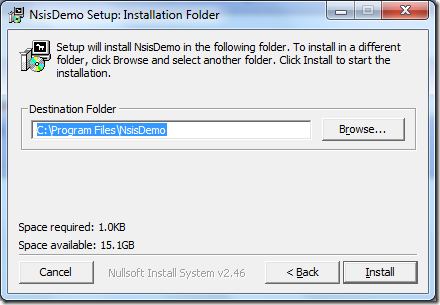 Please note that NSIS is customizable and open source. A lot of other UIs and Plugins are also available – so don’t get deceived by the above ‘minimal’ look of the installer.

Also, you should, see this post where I explain How to use NSIS to create an offline installer for a Silverlight application. Happy Coding!!