This is a quick introduction towards starting your life with Microsoft Robotic Developer Studio (RDS) and Microsoft Visual Programming Language (MVPL) for creating simple robotic simulations. This is intended to be an ‘absolute beginner’s guide’ to RDS.

In fact, I just started playing with RDS after some inspiration from Ramaprasanna during Kerala DevCon 2010 - and it is fun. And the objective of this post is to share the fun, mainly from a hobby programming perspective.

As a pre-requisite, for doing the hands own instructions below - you may need to download and install  Microsoft Robotic Developer Studio 2008 R3 – The installation should be pretty simple and easy.

The RDS comes with two runtimes

1 – Bring up the VPL Designer

Note that you’ll get the VPL Designer, and you’ve a Basic Activities toolbox and Services toolbox on the left pane, a Designer in the middle, and a Project explorer pane towards the right. 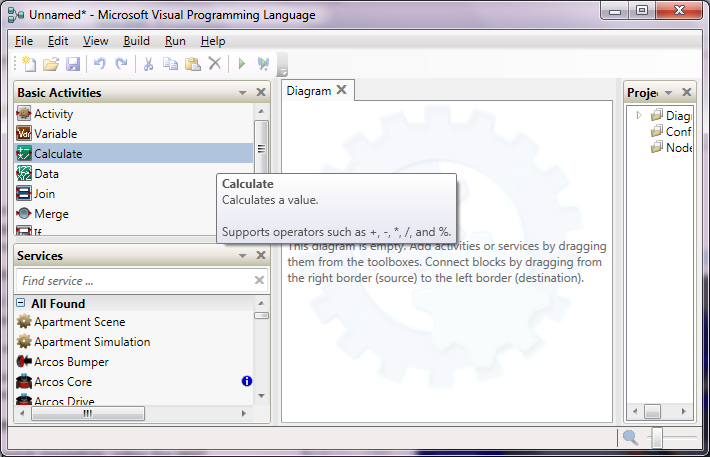 In the Services pane, search for Joystick to filter the listings. Just drag and drop Desktop Joystick from the Services toolbox to the designer pane as shown below. You’ll see a rectangular indicator with a set of connectors. 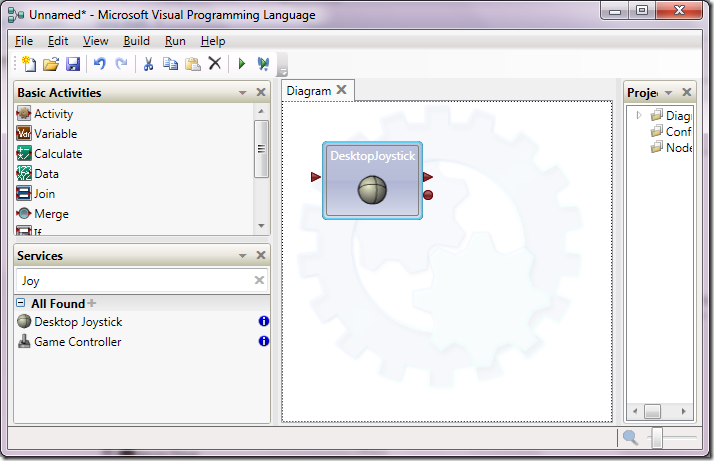 3 – Let us pick a Target service

The next step is obviously to pick a target to receive our Joystick notifications. So, again from the services pane, locate a simple Generic Differential Drive device, and drag it to the designer area as we did for the Joystick. 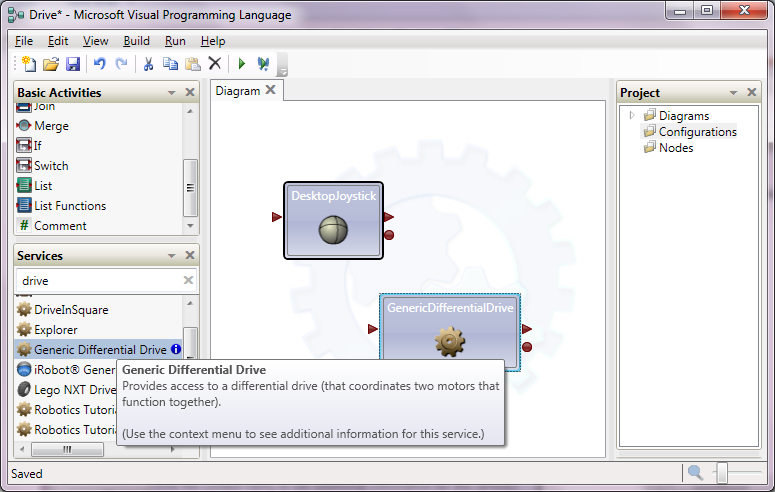 4 – Connect the Joystick to our target

The next step is to connect the Joystick to the target device. For this, create a connection from the Notification icon of our DesktopJoystick towards the GenerciDifferntialDrive indicator (You can click and drag), so that it’ll bring up the Connections dialog box. There, on the ‘From’ area, select UpdateAxes, and ‘To’ area, select SetDrivePower. 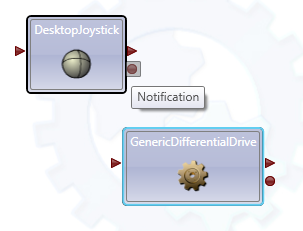 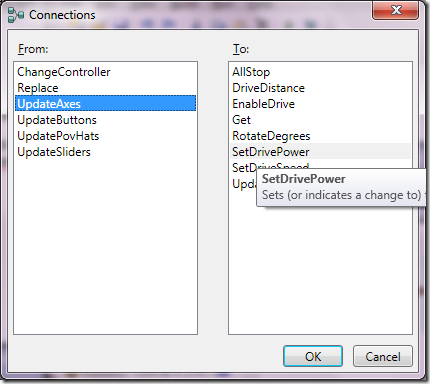 By common sense, this means that when ever user changes the axes of the Joystick, the notification will be pumped to SetDrivePower action of our GenericDifferentialDrive service

Once you press OK button of the connections dialog, this will bring up the Data Connections dialog box. There, you need to check the ‘Edit Values directly’ checkbox (see the Data Connections dialog box below), so that you can edit the values. Modify the Values to what you see in the dialog box below. The target variables (LeftWheelPower and RightWheelPower) represent the parameters of SetDrivePower notification we specified in the above step. The X and Y values represent the input values we are getting from the DesktopJoystick service. And finally, your diagram should look like what you see in the Diagram pane below. You can select the Connector anytime to edit the data connection properties you just specified. 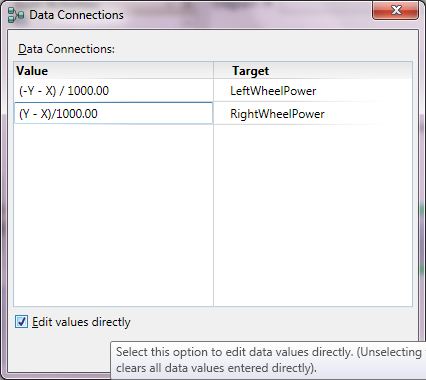 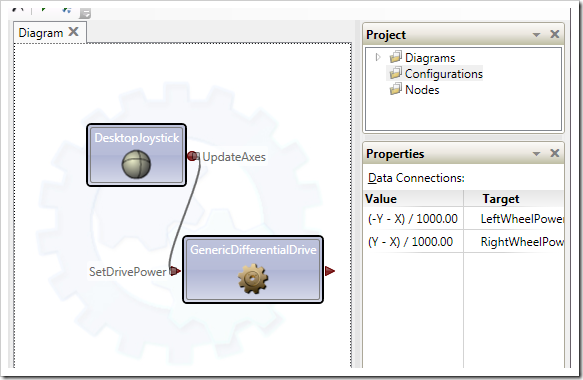 6 – Specify a manifest for your DifferentialDrive service 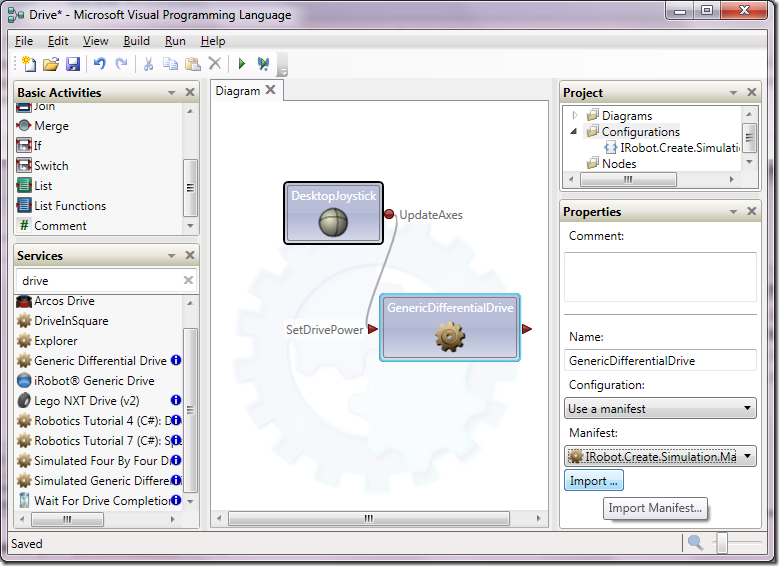 7 – Time for action, Run the simulation.

Just press F5 to run the simulation. You’ll see the simulation environment coming up. Just use your mouse in the Desktop Joystick window, and see the robot moving in the simulator. 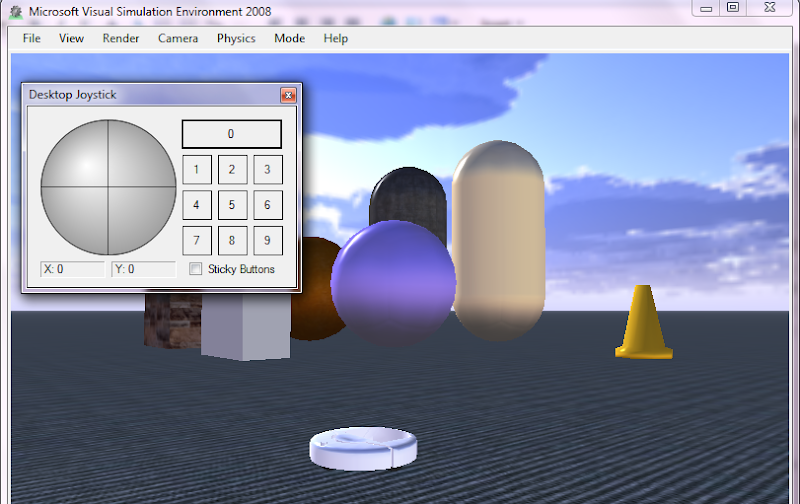 Go ahead and explore more. Have a look at the samples that came with your Robotic Studio installation. Happy Coding!!