Remember the “Three Screens and a Cloud” phrase coined by Ray Ozzie? To understand why it is such a brilliant vision, just take a step back and see what percentage of your time you end up spending with these three screens – your PC, your phone and the Television hanging in front of you. And suddenly, you’ll realize that all recent announcements from Microsoft – be it Azure, Live Services, Bing, Silverlight, Windows 7 or the brand new Windows Phone 7 Series – are just individual pieces of a larger puzzle, already envisioned by Microsoft. 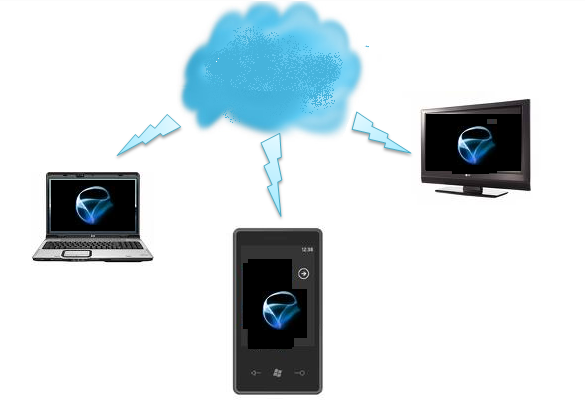 In that sense, Windows Phone 7 device is not just an individual piece you are going to carry with you. The “Life in motion” term coined for describing the user experience in Windows Phone 7 says it all. And probably that is exactly why Steve Ballmer is almost sure that the software is what matters in a high volume phone market. From the TechCrunch interview with Steve, he mentioned,

Microsoft still thinks a software play is right for them in such a high volume market -- noting that, "when 1.3 billion phones a year are all smart, the software that's gonna be most popular in those phones is gonna be software that's sold by somebody who doesn't make their own phone."

A Development Platform For The ‘Three Screens’ Always, Microsoft’s strong hold is the development community they’ve built around them. And providing a familiar, unified platform for developing and running applications for these three screens is extremely critical for Microsoft. Silverlight to the rescue. This is easy for Microsoft as well – because Silverlight run time is a ‘mini implementation’ of the actual CLR, and hence it is easy to port the SLR to other devices.

Even in PCs, Silverlight has grown much after the first release. And some time back, I wrote about considering Silverlight as a platform of choice for developing applications across devices. Already, Silverlight is much more than a ‘cross platform implementation of .NET for the web’.  With Silverlight 4.0, the Out Of Browser features are getting better.

And after the Windows Phone 7 release, at this point of time, I don’t have any doubt that Silverlight is going to be ‘THE’ development platform for Windows Phone 7 as well. And just now, I’ve seen this report from Channel Web, confirming my thoughts.

At next month's MIX10 event in Las Vegas, Microsoft will officially name Silverlight as the platform for building native applications in Windows Phone 7 and future generations of Windows Phones, sources familiar with the matter told Channelweb.com late Monday.

I guess now we are talking business – in near future, Silverlight will emerge as the ‘platform of choice’ to develop and run applications, to provide a unified developer experience, across the three screens.

Talking about The Cloud Above

Of course, one key aspect of the entire story is, the state persistence and data sharing across these screens the user interact with. Enter the Azure. We’ve already seen the Azure, Cloud Services and Live Mesh in action - and we know the kind of investment Microsoft made in the same.

And I remember seeing a demo where you can pause a movie in Windows and resume it in a Mac, using a Silverlight player. But now, that experience is going beyond desktops and laptops – We are talking about seamless integration of these screens with the cloud, that will act as a hub to connect multiple devices and users.

So, blind comparisons between the ‘phone’ operating systems - like Droid, IPhone and Windows Phone 7 Series - is just one part of the story. I think the real discussion point is - how much one screen can complement the other, how efficiently it can integrate, and how easily developers can develop and deploy applications that can run on + integrate each other - for these three screens.

Already, Microsoft needs to compete with established competitors in each of these markets, but I think Microsoft will gain a real competitive advantage when all these things click together.

An interesting observation from @VinayakKamat – as he mentioned in Google Buzz.

Personally I don't think 3 screens and cloud is visionary - it was there all along. We could say infinite screens and cloud, now that is the future - I like Joe, the Windows Phone SVP who did the demo, you could see passion there, hope he capitalizes on it. He was on Ch9 too. If Silverlight on WP7 becomes a reality, this march, it would be a dream come true for .Net developers

I would really love to see the WP7 OS on variety of screens, iPad form factor, bedroom and living room walls (either via projection or energy efficient wall screens)

Wow, I was not really aware about these leaked documents when I wrote the above post. Today, Mary Jo Foley tweeted about some leaked documents about Windows Phone 7. I had a look, and got pleasantly surprised to see this. Have a look at these Leaked documents in WM Power users forum, here is a screen shot of a relevant section, which talks about exactly the same thing I mentioned above - http://wmpoweruser.com/?p=13486

Also, are you a Silverlight guy? Check out my other posts on Silverlight.