Have you ever wrote an Operating System, even if it is very simple? If you've ever tried, you know that it is a fun thing to do. Long time back, in college, when I was doing my diploma and later my B-Tech graduation in Computer Science, I remember most of us got fascinated and inspired by the Linux kernel - and eventually most of us rolled out our own simple boot loaders and Operating Systems!!


And most of us used Asm + C. As C is a very low level language - you can do a lot of things directly. Any of the C library methods (like malloc, printf, crlscr etc) need to be implemented first, to invoke them from C


I'll give an example below.

Let us see how the C library methods are implemented under the hood. We'll go with a clrscr example. When you implement such methods, you'll access system devices directly. For ex, for clrscr (clearing the screen) we know that the video memory is resident at 0xB8000. Hence, to write to screen or to clear it, we start by assigning a pointer to that location.

Let us write our mini kernel now. This will clear the screen when the control is handed over to our 'kernel' from the boot loader. In main.c

To compile our 'kernel', you might use gcc to compile it to a pure bin format.

If you noticed the ld parameters above, you see that we are specifying the default load location of your Kernel as 0x1000. Now, you need to create a boot loader. From your boot loader logic, you might want to pass control to your Kernel, like

You normally write your boot loader logic in Asm. Even before that, you may need to have a look at how a PC Boots - Click Here.

Better start with a tinier Operating system to explore. See this Roll Your Own OS Tutorial

An Operating System in C#??

Now, what about writing an Operating System in C#? I recently came across Cosmos, an excellent "Operating System Project". A cool idea. After you install the Cosmos User Kit, you create a Cosmos boot project in Visual Studio, and run it.

Cosmos includes a compiler IL2CPU which'll convert your IL code to x86 code on the fly (it generates raw asm files and later uses NASM to assemble the same). The build task will also create a boot disk for you, to boot your OS from various emulators. Here you can see Cosmos running from my Virtual PC 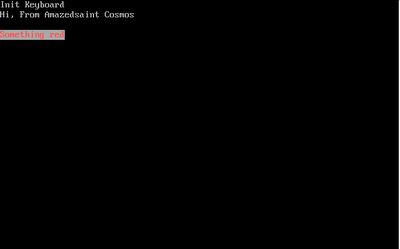 After you install the Cosmos user kit, you can Create a new Cosmos boot project from Visual Studio's New Project dialog box. I just went ahead and wrote some code in the Init method in the Program.cs file.


Run the project, and what is more interesting is the behind the scenes work the build will do for you. It'll show you a dialog box, so that you can choose from various build options. In my case, I've selected to deploy the 'OS' to Microsoft VPC.

If you want to take it to the next level, have a look at Cosmos source code, in Codeplex - http://cosmos.codeplex.com/. Also, you might find this developer documentation handy.

In fact, I blogged earlier a bit about Cosmos and few other interesting projects. Check out that post also, if you find this interesting.