Solution Architect: "Do you have any progress?"

Dumb Developer: "Yes, I think I learned how to apply the Observer pattern to solve all problems"

Solution Architect: "A single pattern to solve all problems?"

Introduction To This Article

In my first article (which constitutes Part I and II), we discussed

This article is a continuation of the previous article, and in this article, we will discuss

If you cannot remember these design problems, kindly go back to the first article, refer them and then come back.

If you can remember, our second design problem was,

As we discussed earlier, when the game is in progress, we need to change the strategy of the team (E.g., From Attack to Defend). This clearly means that we need to separate the Team's Strategy from the Team that uses it.

Strategy pattern is pretty simple. The UML diagram of Strategy Pattern is shown below.

The participants of the pattern are detailed below.

This class is where we actually implement our algorithm. In other words, it is the concrete implementation of the Strategy class. Just for an example, if Sort is the strategy class which implements the algorithm, then the concrete strategies can be MergeSort, QuickSort etc

Now, let us see how we actually adapt the Strategy pattern, to solve our problem. This will give you a very clear picture.

Here, the TeamStrategy class holds the Play function. AttackStrategy and DefendStrategy are the concrete implementations of the TeamStrategy class. The Team holds a strategy, and this strategy can be changed according to the situation of the match (for example, we change the active strategy from AttackStrategy to DefendStrategy, if we lead by a number of goals - huh, well, I'm not a good football coach anyway). When we call PlayGame function in the Team, it calls the Play function of the current strategy. Kindly have a look at the code. It is straight forward, and everything is commented neatly.

By using strategy pattern, we separated the algorithm (i.e, the strategy of the team) from the Team class.

The code for TeamStrategy class is shown below.

The code for AttackStrategy class is shown below. It is derived from TeamStrategy

The code for DefendStrategy class is shown below. It is derived from TeamStrategy

The code for Team class is shown below. A team can have one strategy at a time, according to our design.

Putting It All Together

This is the GameEngine class to create teams, to set their strategies, and to make them play the game. The code is pretty simple and commented heavily.

Execute the project and you'll get the following output.

You can think about creating a player class, and then deriving sub classes like Forward, Midfielder, Defender etc. But it is not the best solution, because as we discussed earlier - a player can be a forward at one time, and at some other time, the same player can be a mid fielder. At least, it will be so in our soccer engine. (any football experts around? ;) ) . So, these were our design problems.

Specific Design Problem: "A player in a team should have additional responsibilities, like Forward, Defender etc, that can be assigned during the runtime."

Problem Generalized: "We need to attach additional responsibilities (like Forward, Midfielder etc) to the object (In this case, the Player) dynamically, with out using sub classing"

Decorator pattern can be used to add responsibilities to objects dynamically. They also provide an excellent alternative to sub classing. The UML diagram of Decorator pattern is shown below.

The participants of the pattern are detailed below.

The Component class indicates an abstract interface for components. Later, we attach additional responsibilities to these components.

The ConcreteComponent class is the concrete implementation of the Component class. It actually defines an object to which additional responsibilities can be attached.

This class is the actual place where we attach responsibilities to the component.

Now, it is time to adapt the Decorator pattern to solve our design problem related to the player.

You can see that we have two concrete components, GoalKeeper and FieldPlayer, inherited from the Player class. We have three concrete decorators, Forward, MidFielder, and Defender. For a team, we may need 11 Field players and one goal keeper. Our design intend is, we need to assign responsibilities like Forward, Defender etc to the players during run time. We have only 11 field players - but it is possible that we can have 11 forwards and 11 midfielders at the same time, because a single player can be a forward and a midfielder at the same time. This will enable us to formulate good playing strategies - by assigning multiple roles to players, by swapping their roles etc.

For example, you can ask a player to go forward and shoot a goal at some point of the match, by temporarily assigning him to a Forward decorator.

To give additional responsibilities to a concrete component, first you create an object of the concrete component, and then you will assign it as the reference of a decorator. For example, you can create a field player and a Mid fielder decorator, and then you can assign the field player to the mid fielder decorator to add the responsibility of mid fielder to your player. Later, if you want, you can assign the same player to an object of a Forward decorator. This is very well explained in the GameEngine module of the Decorator pattern sample code.

See the implementation below. It is heavily commented.

The implementation of Player class is shown below

The implementation of FieldPlayer class is shown below

The implementation of GoalKeeper class is shown below

The implementation of PlayerRole class is shown below

The implementation of Forward class is shown below

The implementation of MidFielder class is shown below

The implementation of Defender class is shown below

Putting It All Together

After executing the project, you'll get the following output. 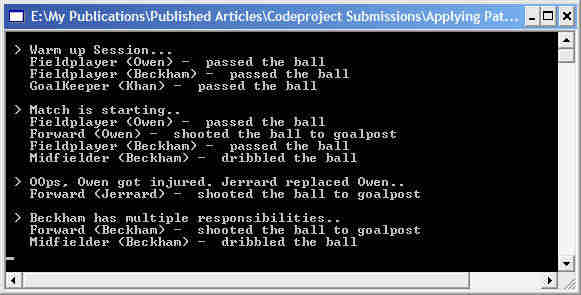 In this article we discussed

That is it for now. In fact, the over whelming response from the code project community to my first article inspired me to publish this one. Thank you for everyone for your response and encouragement.

You can visit my website at http://amazedsaint.blogspot.com for more tutorials, articles and source code.